“Let no one ignorant of geometry enter here!”.
This was the dictum illustrated at the lintel of the entrance of Plato’s Academy in Ancient Athens. Geometry has always been an important discipline for philosophy and spiritual schools. The idea behind has been the perception of the Creator of the Universe as the Geometer thereof. This concept is indeed attested in many esoteric traditions.

While Geometry explores shapes and patterns in nature and in mathematics, sacred geometry searches for this kind of patterns in sacred places like temples or symbols.

From Hinduism and Buddhism, to Alchemy and Free Masonry, sacred Geometry is dominant in symbolism and rituals.

What sacred geometry reveals about our Spirit

Like sacred places then, our individual spiritual structure may be represented by symbols of sacred geometry that indicate patterns of our soul. By selecting a pattern or symbol, we experience a certain affinity to certain rhythms and pulses of the universe. Carl Jung, the renowned psychologist, has regularly dealt with the effect of symbols on our consciousness, especially in his work “Man and his Symbols”.

In order to see what our sacred geometry has to reveal about the patterns of your own spiritual world, select a symbol from the picture below. 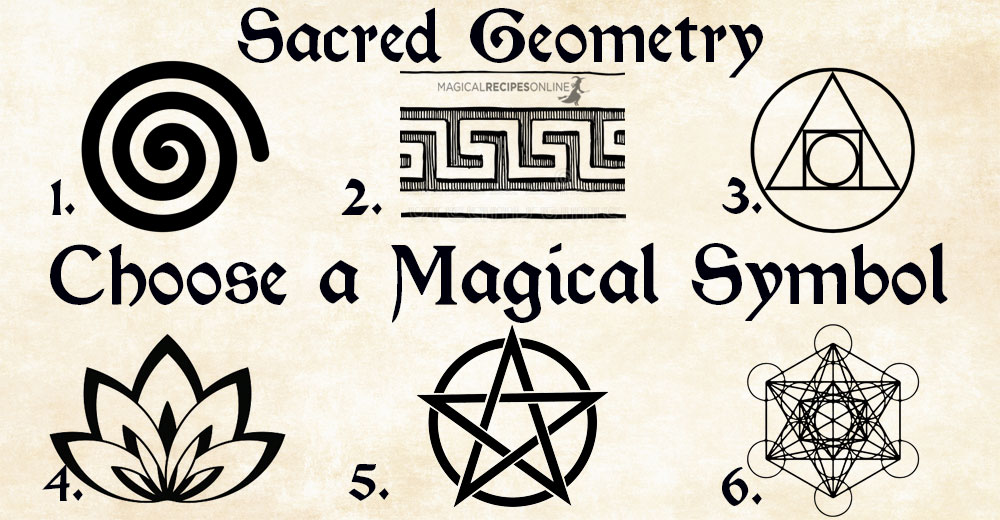 1. Spiral: The Eternal Flow
Spiral is a fundamental pattern that occurs both in the microcosmos and the macrocosm, from the DNA helix to the shape of galaxies. Its harmony has been described through the famous Fibonacci series.

It is habitually linked to Kundalini and its awakening. Spiral represents the flow of Energy that runs through the whole universe both on the material and the spiritual world.

If you have chosen the Spiral you are a person of Action, in the sense that you understand well the connection between individual activity and cosmic energy. You are successful as an entrepreneur and businessperson without losing your spirituality. Yoga and the contact with nature inspire you.

2. Meander: Authority, Harmony and Equilibrium
‘Meander’ refers to various curves, bends, loops, turns or windings that are found in the course of the flow of a river. The term comes from a river called Maiandros by the Ancient Greek. The course of the river exhibited so many windings that it finally named geometrical patterns on pottery and edifices. Even up to our days, meander represents the spirit of the Ancient Greek Classical civilization.

By selecting the Meander, you recognize a certain affinity to the Ancient Greek ideals of Harmony and moral Beauty. Your soul strives for Philosophy and Wisdom. You do not want to stay away from your daily tasks, but your spirit is aristocratic enough to avoid the crowdy bustle. You do care about politics and the common good, fine arts and literature. As a leader, you provide justice and stability.

3. Magnum Opus: The Power to Transform
The third symbol originates from the alchemist tradition. It symbolizes the interaction and union of the four elements and is called “Magnum Opus” or “The Great Work”. In Alchemy, this designation refers to the legendary Philosopher’s Stone, the substance than could turn humble elements such as mercury into gold. On a more spiritual level, the symbol represents the transcendence from the material to the eternal spiritual level by means of our daily mortal activities.

If you felt attracted by this symbol, you are a person capable to bring about far-reaching changes in your own life and your social environment. You have the ability to heal and transform radically by using the basic elements you have at your disposal. Power of Will is crucial for you, therefore you never cease trying until you remove the obstacles. You make a great medical doctor, a therapist or a scientist.

4. The Lotus Flower: Purity of Mind and Action
Lotus is also known as the Padma Flower in the Oriental traditions of Hinduism, Buddhism, Sikhism, and Jainism. The symbol actually refers to the blossom of the plant Nelumbo Nucifera, also known as Indian lotus, Sacred Lotus, bean of India, Egyptian bean or simply lotus. Its Sanskrit name is Padma and is associated with the Hindu deity Vishnu or his wife Lakshmi. Lotus grows in ponds and creeks, often out of muddy waters. Therefore, it symbolizes the rebirth out of darkness and despair.

As a symbol, Lotus represents a pure nature and a spirit of serenity and hope.

Lotus is a symmetric symbol with inherent harmony, but a harmony different to the one of the Meander. It is the harmony we observe directly in nature. If you selected the Sacred Lotus you have a peaceful soul that works silently towards self-fulfillment. You have a calm character with a deep understanding of spirituality. You have the ability to inspire people around you by setting an example as a personality. Moreover, the impact of your meditation can be enormous.

5. The Pentagram: The Hidden Knowledge
It is difficult, if not impossible, to undervalue the importance of Pentagram in the tradition of Witchcraft and every Magical and Spiritual tradition. Its first attestation may go back to 4000 BCE since it appears on pottery artifacts. Its 5 edges represent the five senses or the five elements. It can be regarded as the representation of a human body with the extremities stretched (as in the well-known depiction of the Vitruvian Man drawn by Leonardo Da Vinci).

Pentagram’s peculiarity lies in the fact that it does not only symbolize Power and Spirituality. It is itself already a sign imbued with Power, a bearer of Magical Force. Soon, we will offer a more thorough analysis on the history and the function of this powerful therapeutic symbol that has been demonized and commercialized in our era. It is important to underscore that Pentagram is not a symbol of Evil. Quite the contrary!

Pentagram is the sign of Magic per excellence. If it has a special appeal on you, it means that you are a natural born witch. You have the ability to cast spell and perform rituals. Have you been unaware of this talent that you possess? If not, try to get instructed so that you let your witch within rise and shine in the world.

6. Metatron’s Cube Symbol: God’s Messenger
This symbol comprises 13 circles connected through 78 lines that form various geometrical shapes. Its density and plethora of forms make it an obscure symbol. In fact, Metatron was an angel in Judaism and in Kabbalah and other mystic texts as the celestial scribe or “recording angel” who take account of the deeds of every human being. In some traditions, he is the angel uttering God’s will to mortals with his voice.

Although confusing at first glance, this symbol represents the interconnection between the divine and the mortal.
It is map of the two dimensions of Creation that encompasses the visible and the invisible. If you have selected the Metatron’s Cube you are a person of profound understanding of mystic traditions. You are aware of the fact that the ineffable cannot be expressed without insight, that is why many of you are musicians or painters.

You are empathetic although sometimes you may become distant.

Read next: 6 Reasons why Friday 13th is Considered Bad Luck

Source: this article was originally written by The Alchemist and published in September 1, 2018 on magicalrecipesonline
Original title: Discover the patterns of your Spirit: A Sacred Geometry Test
We own no copyright to the image. It was taken from the source.
Please Note: this article has been re-posted without prior written consent by the original Author. Link to the original article and site can be found above this disclaimer. If you are the Author of this post and you think that we are not re-posting it under the realm of 'fair-use', please contact us earthangelshouse@gmail.com